TMZ Sports is reporting that Raiders CB Nate Hobbs was arrested for DUI hours after the team’s win over the Colts on Sunday. 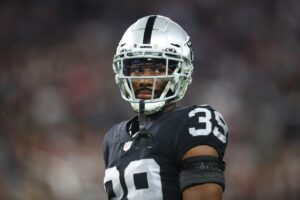 Hobbs was reportedly passed out in his car in Vegas after police responded to a call that witnesses found him asleep at the wheel in a parking lot exit ramp.

Sources tell TMZ that officers made contact with Hobbs and eventually arrested him after he did not pass field sobriety tests.

Records show that Hobbs was booked into the Clark County Detention Center at 6:38 AM. TMZ adds that he’s currently in the process of being released from jail and he will have a court date set for this May.

In 2021, Hobbs has appeared in 15 games for the Raiders and recorded 65 tackles, one sack, an interception, a forced fumble and two pass deflections.