The NFL announced Friday that Raiders CB Nevin Lawson has been suspended without pay for one game after he used a helmet as a weapon during Week 17’s game against the Broncos, per Ian Rapoport.

Lawson specifically violated Rule 12, Section 2, Article 17, which states: “A player may not use a helmet that is no longer worn by anyone as a weapon to strike, swing at, or throw at an opponent.”

Lawson will, obviously, have to serve the one-game suspension to open the 2020 season, given that the Raiders are not in the playoffs.

Lawson, 28 is a former fourth-round pick by the Lions out of Utah State back in the 2014 NFL Draft. He finished his four-year, $3,449,349 rookie contract before agreeing to a two-year, $10.3 million contract with the Lions last year.

The Lions released Lawson back in March and later signed a one-year contract worth $3.05 million with the Raiders. Lawson actually serving a four-game suspension for a PED violation to open the season.

In 2019, Lawson appeared in 11 games for the Raiders and recorded 24 tackles, no interceptions and five passes defended. 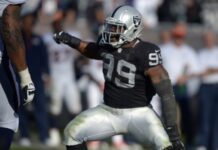