According to Ian Rapoport, the Raiders have had talks about potentially trading away RT Trent Brown. 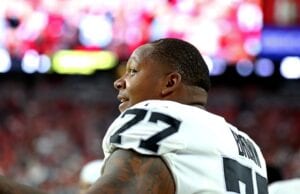 Brown has struggled to stay healthy, playing in just 16 of a possible 32 games the past two seasons since signing with the Raiders.

But with a $14 million cap hit in 2021, all of which would be cleared in a trade, a healthy Brown actually represents a bargain for a team in need of a tackle.

Brown ended up the COVID-19 list twice this past season. He also had an incident with a pre-game IV that sent him to the hospital due to air that entered his bloodstream.

Brown played out the final year of his four-year, $2.28 million contract before agreeing to a record four-year, $66 million deal that includes $36.75 million guaranteed with the Raiders in 2019.

In 2020, Brown appeared in five games for the Raiders and made five starts at right tackle.

We’ll have more on Brown as the news is available.