According to Jason La Canfora, Raiders owner Mark Davis has not begun the search process for a new head coach yet and prefers to focus on the team’s pursuit of a playoff berth for now. 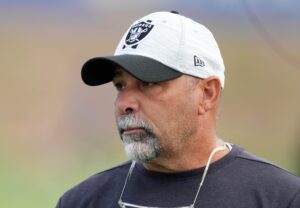 La Canfora adds no shortage of coaching candidates and representatives have reached out to the Raiders since they fired Jon Gruden. But Davis has not been ready to dive into all that a coaching search entails just yet.

“He isn’t ready to go there yet,” someone who spoke with Davis told La Canfora. “He’s not ready to launch a coaching search. That’s not where he is.”

Las Vegas is 6-5, in the thick of the playoff hunt and just toppled the Cowboys on Thanksgiving. Davis is reportedly happy with the job interim HC Rich Bisaccia is doing so far but La Canfora points out the Raiders would have no shortage of highly qualified candidates interested in their coaching vacancy.

Gruden also had most of the power when it came to football matters, so some reconfiguration of the power dynamics inside the organization is likely coming down the pipe.

The NFL tweaked the interview rules to allow teams with head coaching vacancies to interview candidates still working with other teams but La Canfora says sources think Davis might abstain from taking advantage of that if the Raiders are still in the playoff race.

We’ll have more on the Raiders’ coaching search as the news is available.