Peter Schrager reports that the Raiders are signing free agent QB E.J. Manuel to a one-year, “low-cost deal“. This could result in backup QB Matt McGloin being shown the door from Oakland.

Manuel started early on in his career with the Bills but eventually lost the starting role after the team signed Tyrod Taylor and traded for Matt Cassel back in 2015.

The Raiders struggled with backup QBs Matt McGloin and Connor Cook after QB Derek Carr fractured his fibula in Week 16. Given that Oakland’s primary backup position could be up for grabs, signing Manuel adds some competition for the No. 2 role.

Manuel, 26, is a former first-round pick by the Bills in the 2013 NFL Draft and just finished his four-year, $8,885,300 rookie contract. The team did not pick up his fifth-year option, making him an unrestricted free agent.

In 2016, Manuel appeared in six games for the Bills and recorded 11 completions on 26 attempts (42.3 percent) for 131 yards and no touchdowns. He also had eight rushing attempts for 22 yards.

We’ll have more regarding Manuel and the Raiders as the news is available. 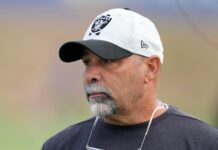