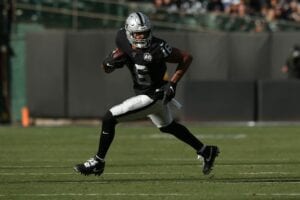 Ian Rapoport previously reported that Williams is dealing with a torn labrum in his shoulder, but was going to attempt to play through the injury after rehabbing for a few weeks.

This should open the door for some Raiders’ receivers like rookie Bryan Edwards to see more opportunities.

From there, Williams agreed to a four-year, $44 million contract with $22 million guaranteed from the Raiders last year.