Ian Rapoport of NFL Media reports that Raiders QB Derek Carr is expected to miss 10-14 days with a “significant” groin injury he suffered during Thursday’s loss to the Chargers. 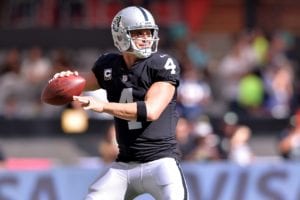 Rapoport mentions that Carr is expected to fight to be back in time for their game against the Dolphins.

Marcus Mariota looked pretty good in relief of Carr, so it will be interesting to see what he can do in the coming weeks.

Carr, 29, is a former second-round pick of the Raiders back in 2014. He was in the final year of his contract when the Raiders signed him to a five-year, $125 million extension that included $70 million guaranteed in 2017.

Carr stands to make base salaries of $18.9 million and $19.52 million over the next two years of the agreement.

In 2020, Carr has appeared in 14 games for the Raiders and completed 68.1 percent of his passes for 3,396 yards, 24 touchdowns and seven interceptions. He has also rushed for 141 yards and two touchdowns.