Once the rumors began to circulate that the league was resetting the unrestricted-free agent requirements back to four-years, it seemed as though the Oakland Raiders were going to lose RB Michael Bush during free agency but FOX Sports’ Adam Caplan is reporting that Bush’s rookie may not count towards the total number of accrued seasons which would leave him a restricted-free agent.

Good news for the Raiders if this ends up being the case because they will be able to retain him at low cost and they’ll have a solid compliment to Darren McFadden for the upcoming season. Other teams will still be able to sign him away but they would have to part with a first and third-round pick to do so and that’s a really high cost to pay for any free agent especially a running back. 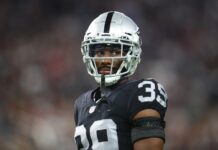