The Oakland Raiders brought in six players for tryouts on Saturday including former 49ers OL Joshua Garnett, according to Howard Balzer.

Garnett, 25, is a former first-round pick by the 49ers in the 2016 NFL Draft. He was entering the second year of a four year $9.304 million rookie contract when the 49ers waived him coming out of the preseason.

Garnett has worked his way back from an offseason knee scope and has tried out for the Broncos, Texans, Titans and Packers since becoming a free agent. 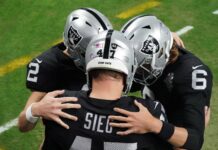