Jourdan Rodrigue reports that the Rams have agreed to a one-year deal worth close to the veteran minimum with TE Johnny Mundt. 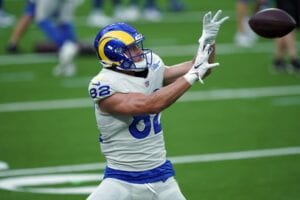 The Rams declined to tender Mundt a restricted offer this offseason.

Mundt, 26, wound up going undrafted out of Oregon back in 2017. He was waived coming out of the preseason and was on and off of their roster over.

The Rams brought Mundt back on a futures contract for the 2018 season and he’s managed to make the 53-man roster each of the past two years. Mundt signed an exclusive rights deal with the Rams last year.

In 2020, Mundt appeared in all 16 games for the Rams and caught four passes for 53 yards receiving and no touchdowns.