According to his Instagram page, Ravens DL Derek Wolfe has undergone another hip surgery, with his first taking place back in January. 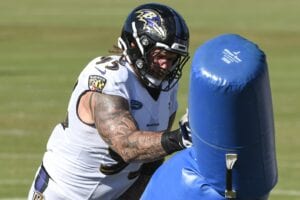 “We’re going to try to get a full recovery here and try to live a normal life,” Wolfe said, via his Instagram.

Back in March, he tweeted that he intended on returning for the 2022 season and has a fully guaranteed salary of $2 million. He had missed the entire 2021 season due to injury.

“We’ll see what happens with if I retire or not or if I keep playing,” Wolfe said back in March. “I’m not sure yet. We’ve got to see how this hip goes.”

Wolfe mentioned that he is dealing with a slow rehab process after having the soft tissue covering his hip socket “completely reattached” in January. Wolfe indicated that doctors shaved “a bunch of extra bone off my femur and off my pelvis.”

Wolfe also said he’s dealing with “bulging” and “degenerative” discs in his back.

The Ohio native was designated to return from injured reserve during the 2021 season, but his back and hip injuries prevented him from officially being activated.

Wolfe, 31, is a former second-round pick of the Broncos back in 2012. He finished the final year of his four-year, $36.7 million contract that included $17.5 million guaranteed and made a base salary of $8 million for the 2019 season.

We will have more news on Wolfe as it becomes available and we wish him the best in his recovery.