According to Adam Schefter, Ravens TE Nick Boyle will miss the rest of the 2020 season due to a knee injury suffered Sunday night against the Patriots.

Boyle is one of the league’s better blocking tight ends and a key piece of Baltimore’s offense, so this is a major loss for the team.

Expect the Ravens to place Boyle on injured reserve shortly.

Boyle, 27, was taken in the fifth round of the 2015 NFL draft by the Ravens. He played out the final year of his four-year, $2.44 million contract before signing a three-year, $18 million deal.

In 2020, Boyle appeared in nine games for the Ravens and caught 14 passes for 113 yards receiving and two touchdowns. Pro Football Focus had him rated as the No. 14 tight end out of 67 qualifying players. 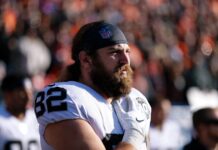 never good when as soon as the play is over the opposition jumps up and starts waving to the sidelines. Nasty.