According to Jeff Zrebiec, Ravens OL Trystan Colon tested positive for COVID-19 and is being placed on the reserve list. 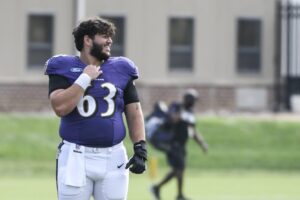 He is Baltimore’s backup center, so this could be something to watch for the Ravens in the coming days.

Colon, 23, signed with the Ravens after going undrafted out of Missouri in the 2020 NFL Draft. He was waived during the final roster cuts and added to the Ravens practice squad the next day.

He was later promoted to the active roster and Baltimore placed an exclusive-rights free agent tender on him in March.

In 2021, Colon has appeared in nine games for the Ravens with no starts.