According to Howard Balzer, the Ravens placed practice squad QB Chris Streveler on the COVID-19/Reserve list on Friday. 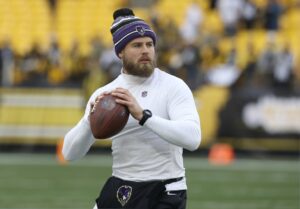 Streveler, 26, spent two seasons with the Winnipeg Blue Bombers of the CFL after playing college football at South Dakota. After leading Winnipeg to a Grey Cup title, the team released him to allow him to pursue NFL opportunities.

Streveler caught on with the Cardinals and played for them for the past two seasons before being let go and subsequently joining the Ravens’ practice squad.

In 2021, Streveler appeared in two games for the Cardinals completing six of his nine attempts for 36 yards. He also carried the ball three times for a total of six yards.

We will have more news on Streveler as it becomes available.