According to Adam Schefter, the Ravens and QB Lamar Jackson have mutual interest in a long-term deal and have had “positive and ongoing” dialogue. 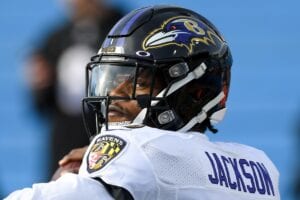 However, Schefter says Jackson, who is representing himself and does not have an agent, has been prioritizing preparing for the season over contract negotiations so far, which is why a deal hasn’t been completed yet.

He adds a deal could be completed sometime during the regular season when Jackson has more time to focus on them.

Thanks to a stint on the COVID-19 list earlier during camp, Jackson had to work to catch up while talks were still in the preliminary phase. However, both sides maintain a deal is just a matter of time.

Jackson has said that he’s hoping to finish out his career in Baltimore.

Bills QB Josh Allen signed a long-term deal worth $43 million a year this summer, so that’s the number to monitor for Jackson’s eventual deal.

We’ll have more regarding contract talks between the Ravens and Jackson as the news is available.