Crockett, 26, wound up signing on with the Packers as an undrafted free agent out of North Dakota State back in May of 2015. However, he dealt with injuries during the preseason, which led to him being among their final roster cuts. The Packers later signed him to their practice squad.

Crockett, unfortunately, spent the 2016 season on the injured reserve and the Packers declined to tender him a qualifying offer last year. He had a brief stint with the Raiders before signing on to the Ravens’ practice squad a few weeks into the 2017 season.

The Ravens brought Crockett back on a futures deal this past January. 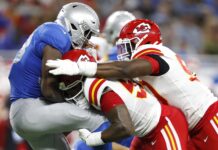 186,384FansLike
7,623FollowersFollow
276,464FollowersFollow
© NFLTradeRumors.co is an independent news source and has no affiliation with the National Football League (NFL), NFL.com, or any team(s).
wpDiscuz