Update: According to Ian Rapoport, Redskins RB Derrius Guice has had the surgery on his knee and is out an indefinite period of time. Rapoport says the Redskins are considering their roster options.

According to Adam Schefter, Redskins RB Derrius Guice is seeking a second opinion on his torn meniscus in his knee with Dr. James Andrews in Florida.

Schefter adds in the likely event Guice undergoes surgery, he would be sidelined six to eight weeks.

Guice spent his entire rookie season on injured reserve after tearing his ACL last preseason, but he picked up this injury to his other knee sometime in the last few weeks.

He overcame numerous complications to play in his first regular-season game Sunday. Guice rushed for 18 yards on 10 carries.

During his three-year college career at LSU, Guice rushed for 3,074 yards on 471 carries (6.5 YPC) to go along with 32 receptions for 250 yards receiving 32 total touchdowns over the course 35 games. 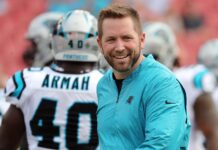