According to Ian Rapoport, those close to Packers QB Aaron Rodgers say his relationship with the team is as good as it has been in a while, though no one except Rodgers knows exactly what the quarterback will decide regarding his future. 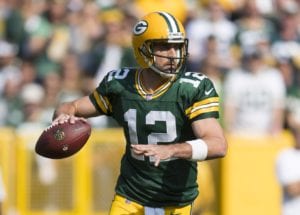 Rapoport adds if Rodgers stays, he’ll need a new contract to lower his cap hit. He says the Packers are willing to make Rodgers the highest-paid quarterback in the NFL on a per-year basis. That bar is set by Chiefs QB Patrick Mahomes at $45 million per year.

The deal would be short, probably just two years per Rapoport, with void years tacked onto the end to prorate whatever signing bonus he receives and lower his figure on the books for 2022.

Adam Schefter adds the traditionally conservative Packers front office is willing to go all-in on 2022 to build the team around Rodgers, including pushing salary into future years like the Saints did with Drew Brees.

After receiving the NFL MVP award last week, Rodgers said he plans to make a decision on his future soon. He also praised Packers GM Brian Gutekunst and the team for how they went about addressing the rift in their relationship.

“There was obviously some things that were voiced in the offseason, privately between him and myself, and I’m just thankful for the response,” Rodgers said of Gutekunst. “There was a lot of things that were done to make me feel really special and important, to the present, the past and the future of the franchise. And I’ve got to say that Russ and Brian especially had a big hand in that. And it didn’t go unnoticed.”

Rodgers left the door open-ended in terms of whether he’ll be back in Green Bay, but says there’s a good foundation for them to build off of from here either way.

“I think there’s a lot to build on there, whether I’m there or not,” Rodgers said. “I think they’ve got a really good nucleus in place. Should I come back, there’s some things that need to get done, probably, to get the team where it needs to go. Should I feel like it’s my time to move on and do something else, I’ll be extremely eternally grateful for the Green Bay Packers organization, the fan base and all the incredible 17 years’ worth of memories and friendships and special, special moments that I’ve gotten to share with members of the organization, my teammates, people that work there and the fans, as well. I’m just super-thankful for every single moment in the journey.”

Rodgers’ own contract is among those that will need to be addressed. He’s set to have a cap hit of over $46 million in 2022, which is also the final year of his deal. A trade or extension are two ways to lower that.

We’ll have more on the Packers and Rodgers as the news is available.