Jordan Schultz is now reporting that the Bills are making a “concerted effort” to retain Ken Dorsey.

Sources tell Schultz that negotiations with the Giants center around a “big payday” and new HC Brian Daboll is making a “strong push” to hire him in New York to work with QB Daniel Jones.

Dan Graziano mentions that if Dorsey departs for the Giants, he would be the play-caller in New York with Daboll ceding these duties to him.

Jordan Schultz reports that Bills QBs coach Ken Dorsey is in negotiations with the Giants to become their new offensive coordinator under Brian Daboll. 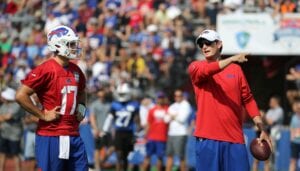 It seemed like Dorsey was a natural in-house replacement for Daboll, considering that he would be able to call plays in Buffalo. However, there has been recent buzz about Dorsey following Daboll once he got a job.

Dorsey was Florida International’s assistant athletics director in 2018. Appalachian State hired him as their next offensive coordinator going into 2019 but he took a job with the Bills as their QBs coach shortly after, making his stint with the school short-lived.

We’ll have more regarding Dorsey and the Giants as the news is available.