According to Jason La Canfora, multiple teams are interested in Ravens OT Orlando Brown, who has been given permission by the team to seek a trade. 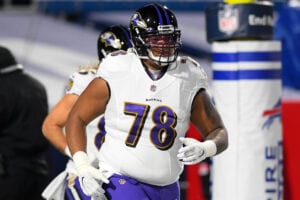 La Canfora says that based on the level of interest, there’s a good chance that a trade will emerge that makes sense for everyone.

Brown has spoken about his desire to play left tackle to honor his father, the late Orlando Brown Sr. who was a long-time NFL player. He filled in at left tackle for Ronnie Stanley this past season when Stanley was hurt but was a right tackle the two years previously.

The Ravens committed a massive deal to Stanley as their left tackle, so unless Brown relents in his desire, there doesn’t appear to be room for him in Baltimore. Still, he’s a promising young tackle and the Ravens will want a strong return to trade him away.