Camryn Justice reports that Browns DE Myles Garrett was involved in a single car crash after practice on Monday. 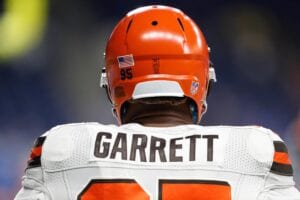 According to Justice, Garrett and a passenger sustained “non-life threatening” injuries and were transported to a nearby hospital.

Justice adds that Garrett’s Porsche went off the side of the road and flipped several times before coming to a stop. Garrett sustained minor injuries.

The cause of the crash is unknown at this time and neither alcohol nor drugs were factors in the crash.

Garrett, 26, is a former first-round pick of the Browns back in 2017. He just finished the third year of his four-year, $30.4 million fully guaranteed contract and was set to make a base salary of $4.61 million for the 2020 season when he agreed to a five-year extension worth $125 million with the Browns.

In 2022, Garrett has appeared in three games for the Browns and recorded seven tackle, three sacks, a forced fumble and a pass defense.

We’ll have more regarding Garrett as the news is available.