The XFL is hosting another showcase on Saturday, this time in Tampa Bay.

Mallett, 31, is a former third-round pick of the Patriots back in 2011. He was traded to the Texans in 2014 in return for a conditional sixth-round pick.

Mallett lasted just over a year in Houston before he was released and later signed by the Ravens during the 2015 season. He spent three years in Baltimore as Joe Flacco’s backup.

In 2016, Mallett appeared in four games for the Ravens and threw for 26 yards and one interception while completing three of six pass attempts.

Jones, 26, is a former third-round pick of the Redskins back in 2015. He spent just over two years in Washington before he was waived at the start of the 2017 season.
Jones later caught on with the Colts and was on and off of their roster over the next year. The Eagles signed him to a contract last May, but he was once again among their roster cuts at the start of the season.
For his career, Jones has appeared in 25 games and rushed for 964 yards on 248 carries (3.9 YPC) to go along with 27 receptions for 377 yards and seven touchdowns.Elam, 27, was taken with the No. 32 overall pick in the 2013 draft. He finished the final year of his four-year, $6.767 million rookie contract that included $5.439 guaranteed.

Elam’s 2015 season ended after he suffered a torn biceps. However, Elam wound up being suspended one game without pay for violating the NFL substance abuse policy.

The Ravens declined to pick up Elam’s fifth-year option that would have cost them over $5.6 million in 2017.

For his career, Elam has appeared in 41 games and recorded 124 tackles, a half sack, an interception, a forced fumble, two receoveries and seven pass defenses. 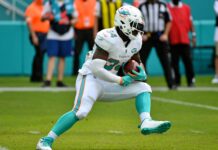 187,511FansLike
7,623FollowersFollow
275,705FollowersFollow
© NFLTradeRumors.co is an independent news source and has no affiliation with the National Football League (NFL), NFL.com, or any team(s).
wpDiscuz