ESPN’s Mike Triplett reports that the Saints are in fact starting Taysom Hill at quarterback for Thursday night’s game against the Cowboys. 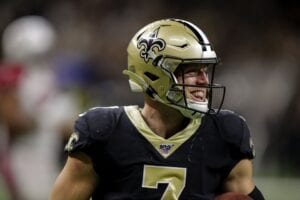 Indications were that Hill was going to draw the start this week so this shouldn’t come as a big surprise.

Veteran QB Trevor Siemian had been starting in recent weeks but the production and wins have not been there.

The team just gave Hill a sizable contract extension, so it makes sense for them to put him in the lineup again.