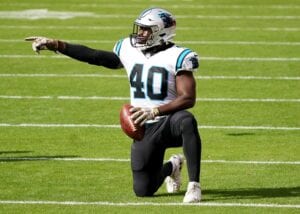 Armah, 27, was taken in the sixth round by the Panthers in 2017. He signed a four-year, $2.55 million contract with Carolina but was unfortunately among their final roster cuts coming out of the preseason.

The Panthers later signed him to their practice squad before promoting him to the active roster.

Armah signed a one-year $1.1 million deal with the Saints in March of this year.

In 2020, Armah appeared in all 16 games for the Panthers and had six carries for nine yards to along with five catches for 18 yards.