According to Ian Rapoport, the Seahawks are placing S Jamal Adams on injured reserve. He adds Adams will need season-ending surgery on his torn quadriceps tendon. 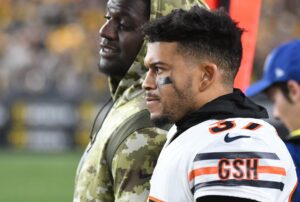 To fill Adams’ spot on the roster, the Seahawks are signing CB Teez Tabor from the Falcons practice squad.

Seattle signed him to a four-year, $70 million extension in August of 2021.

Tabor, 26, was drafted by the Lions in the second round out of Florida back in 2017. He was set to enter the third year of his four-year, $4.82 million rookie contract with $2.79 million guaranteed when Detroit cut him loose during final roster cuts.

Tabor had a short stint with the 49ers before catching on with the Bears in 2020. He stuck around on a futures deal for 2021 and was signed to the practice squad once the season began and eventually was promoted to the active roster.

In 2021, Tabor appeared in six games for the Bears and recorded eight tackles and no interceptions.