Adam Schefter reports that Taysom Hill will, in fact, start for the Saints in Week 11’s game against the Falcons.

Jameis Winston will not be a part of any offensive packages this weekend, according to Dianna Russini, which means it’s all on Hill.

Ian Rapoport of NFL Media reports that while the Saints had Jameis Winston replace Drew Brees during last week’s game, Taysom Hill has received the starter reps in practice this week. 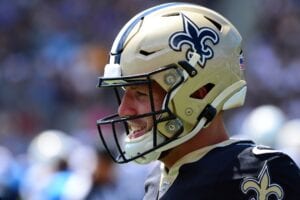 Rapoport says signs are pointing to Hill making his first NFL start if everything goes well in practice.

Brees is expected to miss at least 2-3 weeks due to the rib injuries and collapsed lung he’s dealing with.

Many thought Winston would draw the start in Brees’ absence, but it looks like Hill could get an opportunity to show what he can do this weekend.

Hill, 30, wound up signing on with the Packers as an undrafted free agent out of BYU back in 2017. He was waived and later claimed off of waivers by the Saints.

Hill has played out the final year of his rookie contract before receiving a restricted tender from the Saints this March. New Orleans later signed Hill to a two-year deal worth $21 million a month later.

In 2020, Hill has appeared in nine games for the Saints and completed 4 of 5 pass attempts for 86 yards. He has also rushed for 186 yards and a touchdown.

Its about time. Hill is a great all around player. He’ll show Payton he is the future for the saints as a QB

Awesome Be Yourself Don’t Try To Beat Drew , One Play At A Time , An You Will Be Great