According to Adam Schefter, Steelers CB Joe Haden now plans to play out the final year of his contract in Pittsburgh. 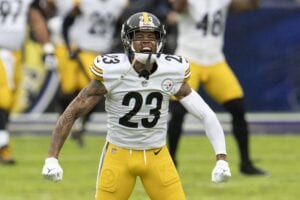 Haden expressed a desire earlier during camp to sign a deal to finish his career in Pittsburgh.

However, this pivot potentially signals how those talks went, as his agent tells Schefter he plans to test the free-agent market in 2022 when the cap is supposed to go up by quite a bit, although by then Haden will be a 33-year-old cornerback.

“Joe has never been a UFA before and is excited about that opportunity,” Rosenhaus said. While Haden was cut by the Browns in 2017, it was in September and not March, meaning some teams had exhausted their budgets already. “We expect him to have a very strong market.”

Haden, 32, is a former first-round pick of the Browns back in 2010. He was in the fourth year of his six-year, $74.678 million contract when the Browns officially cut him loose coming out of the preseason in 2017.

The Steelers quickly signed Haden to a three-year, $27 million contract soon after he was cut and re-signed him to a two-year, $22 million extension. He’s currently in the final year of his contract and set to make a base salary of $7 million for the 2021 season.

Haden will be an unrestricted free agent in 2022.