According to Brooke Pryor, the Steelers waived DE Demarcus Christmas with an injury designation on Thursday. 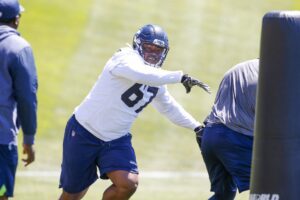 Christmas will revert to the team’s injured reserve once he passes through waivers.

Christmas, 25, is a former sixth-round pick by the Seahawks in the 2019 NFL Draft out of Florida State.

He was entering the second year of a four-year, $2.6 million rookie contract when Seattle waived him and re-signed him to the practice squad.

Christmas was cut by the Seahawks in October of 2020 and signed on with the Steelers’ practice squad a month later. Pittsburgh signed him to a futures deal earlier this offseason.