Chris Mortensen reports that the Cardinals have, in fact, fired HC Steve Wilks.

Ian Rapoport of NFL Media reports that Cardinals HC Steve Wilks has told his staff during a meeting that he will not be the coach going forward.

However, Rapoport says that Wilks has yet to receive official word from Cardinals owner Michael Bidwill.

Reports had said for months now that Wilks was unlikely to survive the season that resulted in the team securing the No. 1 overall pick.

The Panthers promoted him to assistant head coach in 2015 and then to defensive coordinator last year after Sean McDermott took the Bills’ job. 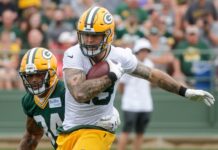