Last week ESPN’s Chris Mortensen reported that WR Terrell Owens had torn his ACL and was likely to miss at least a portion of the upcoming NFL season.

His agent Drew Rosenhaus told ESPN’s SportsCenter earlier in the week that Owens was not considering retirement like some reports had previously suggested.

“Terrell Owens will be ready and playing at the start of the season,” said Rosenhaus. “All this retirement talk is nonsense. There’s no discussion of that.”

Rosenhaus went to say that Owens actually tore his ACL back in April and he’s had “many, many weeks” to recover from the injury. Drew also added that the ACL tear was in the same knee that he injured last year.

Agents are paid to effectively sell their clients to the media and teams so I wouldn’t put much stock in Rosenhaus’s comments other than the fact that ACL tear was in his left knee. Owens will still have a hard time finding a team that’s willing to take a chance on him because of his recent injuries, age, and the off-the-field drama that he brings to teams but I guess there’s a chance that a wide-receiver needy team will give him some consideration during the upcoming season. 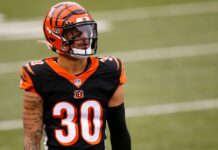