According to Field Yates, the Texans claimed LB Eric Wilson off of waivers from the Eagles on Thursday. 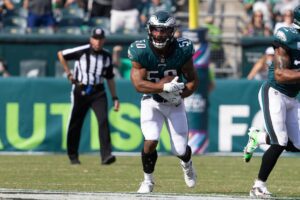 Wilson, 27, was signed by the Vikings as an undrafted free agent out of Cincinnati in 2017. He played out the final year of his three-year, $1.66 million contract after making the final roster each of his first three seasons.

The Vikings brought Wilson back on a second-round restricted tender worth $3.27 million for the 2020 season. He signed with the Eagles on a one-year deal for 2021 but was cut loose on Wednesday.

In 2021, Wilson has appeared in seven games for the Eagles and recorded 43 total tackles, one interception, and one pass deflection.