Todd Archer reports that the Texans are signing free agent LB Joe Thomas to a one-year, $2 million contract on Monday. 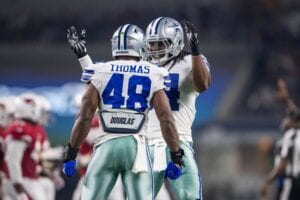 Thomas, 29, wound up signing on with the Packers as an undrafted free agent out of South Carolina State back in 2014. He dealt with an injury during his rookie and briefly played for the Cowboys in 2015 before he returning to the Packers a few weeks into the season.

The Packers declined to tender Thomas a restricted offer in 2018 and he eventually signed a two-year contract worth up to $4.6 million with the Cowboys. Dallas brought him back on a one-year contract last year.

In 2020, Thomas appeared in 15 games for the Cowboys and recorded 48 tackles, no sacks and two passes defended.