According to Aaron Wilson, the Texans brought in three running backs for workouts on Thursday including Kalen Ballage, Brenden KNox and Sewo Olonulua. 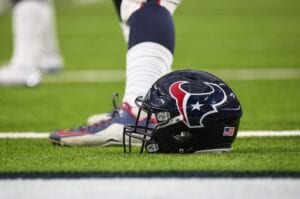 Ballage, 26, is a former fourth-round pick by the Dolphins in the 2018 NFL Draft out of Arizona State. He was entering the third year of his four-year, $3 million rookie contract when he was traded to the Jets.

New York agreed to send a conditional 2021 seventh-round pick to Miami in exchange for Ballage. However, the deal fell through after he failed a physical and Ballage was released by the Dolphins.

The Jets later signed Ballage to their roster before waiving him a few weeks later. He then signed on to the Chargers’ practice squad. He was promoted to the active roster late in the season.

Ballage signed a one-year deal with the Steelers for the 2021 season.

In 2021, Ballage appeared in all 17 games for the Steelers and rushed for 36 yards on 12 carries to go along with two receptions on seven targets for eight yards.

Olonilua, 24, originally signed on with the Cowboys as an undrafted free agent out of TCU back in 2020. He bounced on and off their practice squad before landing on the injured reserve in August of last year. Dallas cut him loose back in May.

In 2020, Olonilua appeared in two games for the Cowboys but did not record any statistics.