Mike Freeman CBSSports.com reports that he has already spoke with one NFL team executive who said that Randy Moss is “utterly obliterating his chances of returning” to the NFL with his recent UStream chats.

The NFL exec mentions that he had interest in signing Moss but has now decided against doing so because of his web rants. According to Freeman’s source, NFL teams would like see that Moss has “stability in his life” before taking a chance on signing him.

The best years of Moss’ career have come when he’s had something prove and was properly motivated. The Cowboys passed on him in the draft and took Shaun Ellis over him. Moss has said that this was a hugely motivating factor for him during his early years in the NFL. Upon joining the Patriots, Moss was seen as lost cause after some of his worst seasons in the NFL but he went on to break numerous records with Tom Brady. Since retiring from the game, he’s said that he would like to return to the Patriots but it’s hard to say that they’d be interested in bringing back a player that they traded away because of his character issues.

Either way, there’s bound to be someone interested in him at some point as long as he doesn’t do anything too crazy on “Moss TV.” 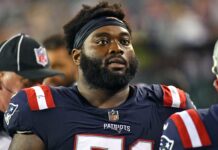