The Buffalo Bills announced Wednesday that they’ve officially traded TE Lee Smith to the Falcons for a 2022 seventh-round pick.

The @buffalobills have agreed to trade TE Lee Smith to Atlanta for a 2022 7th round pick.

Adam Schefter reports that the Bills are trading TE Lee Smith to the Atlanta Falcons for a 2022 late-round pick. 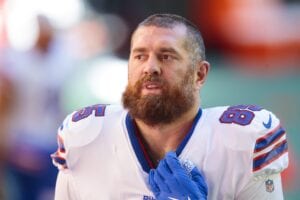 Smith, 33, is a former fifth-round pick of the Patriots back in 2011. After four years with the Bills, Smith signed a three-year, $9 million contract with the Raiders back in 2015.

Smith was set to make a base $3 million base salary for the 2017 season when he agreed to a pay cut. He later signed a three-year, $9 million contract with the Bills in May of last year.

He is entering the final year of his contract and will make a base salary of $1,900,000 next season.

According to OverTheCap.com, trading Smith will free up $2,250,000 of available cap space for the Bills while creating no dead money.

In 2020, Smith has appeared in two games for the Bills and caught one pass for one yard and one touchdown.