According to Ian Rapoport, the Vikings have agreed to rework DE Danielle Hunter‘s deal. 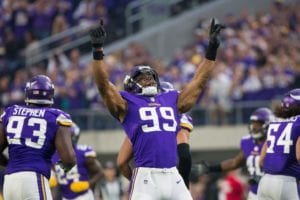 Rapoport says the Vikings converted $5.6 million of his base salary into a signing bonus. Minnesota also added an $18 million roster bonus on the fifth day of the 2022 league year to create an inflection point to either pay Hunter $20 million, release him or sign him to an extension.

In return, Hunter plans to report for minicamp this week with his contract, a source of frustration since last season, addressed.

Hunter missed this past season after undergoing surgery for a herniated disc. He had expressed unhappiness through his agent with his contract, which still has three years remaining, at that time but Vikings GM Rick Spielman said earlier this offseason Hunter had not requested a trade and downplayed the situation.

Hunter, 26, is a former third-round pick of the Vikings back in 2015. He was entering the final year of his four-year, $2.969 million rookie contract when Minnesota re-signed him to a five-year, $72 million extension that includes $40 million guaranteed to go along with a $15 million signing bonus.

We’ll have more on Hunter as the news is available.