According to Field Yates, the Vikings are nearing a deal to sign former Browns DT Sheldon Richardson. 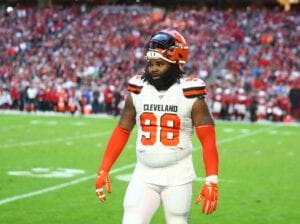 KFAN’s Jack Day was the first to report the news earlier in the day. The Vikings are set to start minicamp this week.

Richardson was cut by the Browns earlier this offseason, who hoped to bring him back at a cheaper rate. The veteran has elected for a fresh start, however.

Richardson, 30, is a former first-round pick of the Jets back in 2013. He played out the final year of his four-year, $10.054 million rookie contract but the Jets elected to pick up his fifth-year option.

From there, the Jets traded Richardson to the Seahawks for WR Jermaine Kearse and 2018 second-round pick. However, Richardson played out his contract and later signed a one-year contract with the Vikings.

The Browns signed Richardson to a three-year, $36 million contract in 2019 before releasing him a few weeks ago.

In 2020, Richardson appeared in all 16 games for the Browns and recorded 64 tackles, 4.5 sacks, a forced fumble and three pass deflections. Pro Football Focus had him rated as the No. 48 interior defender out of 126 qualifying players.