According to Ben Standig, the Washington Football Team activated DT David Bada from their injured reserve and signed him to a futures contract. 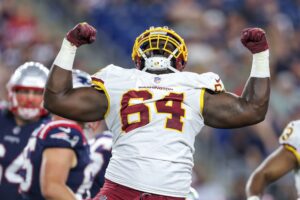 Bada, 26, signed on with Washington from the International Pathway system in Germany in April of 2020. He played in Germany’s top football division for a team known as the Schwäbisch Hall Unicorns.

In 2021, Bada appeared in three games but did not record any statistics.