Ian Rapoport of NFL Media reports that Washington QB Kyle Allen has been cleared from the COVID-19 protocols on Friday and can return to the active roster and practice field. 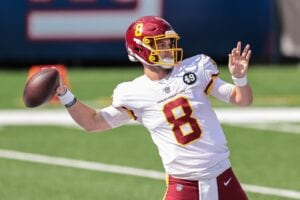 This comes a day after Washington activated starter Taylor Heinicke, so it appears Washington will have all of their quarterbacks this weekend.