According to Sam Fortier, Washington is placing OL Saahdiq Charles on injured reserve due to a dislocated knee injury. 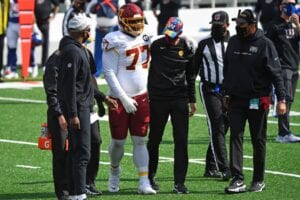 Charles, 21, was selected in the fourth round by Washington in the 2020 NFL Draft out of LSU. He’s in the first year of his $4.09 million rookie contract.

In 2020, Charles has appeared in one game for the Washington Football Team as a starting left guard.