Brian Costello reports that Jets QB Zach Wilson has a bone bruise and meniscus tear and is expected to miss 2-4 weeks.

Wilson will still get a second opinion and there’s a chance that doctors will find something different once they go in to fix the meniscus, but this appears to be good news.

Jeff Howe of The Athletic reports that Jets QB Zach Wilson suffered a bone bruise to his right knee during Friday’s preseason game. 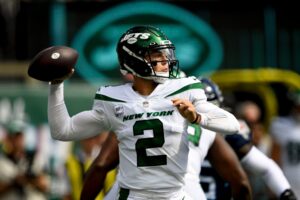 The good news is that Wilson’s ligaments are in “good shape.” The plan is still for him to undergo some more tests to determine whether he has potential meniscus damage.

The immediate concern was for a potential ACL injury, but the Jets seemed confident after the game that this wasn’t as bad as it appeared to be.

Wilson, 23, was a three-year starter at BYU and a first-team All-Independent league selection as a junior. The Jets drafted Wilson with the No. 2 overall pick in the 2021 draft.

In 2021, Wilson appeared in 13 games for the Jets and completed 55.6 percent of his passes for 2,334 yards, nine touchdowns and 11 interceptions to go along with 185 yards rushing and four rushing touchdowns.