Aaron Wilson of the National Football Post reports that the Rams hosted free agent TE Joseph Fauria for a visit on Thursday.

Fauria, 25, spent over two years with the Lions before he was unfortunately among their final roster cuts at the start of the season. The Cardinals later signed him to a contract before adding him practice squad. He was eventually being release close to a month ago.

In 2014, Fauria appeared in seven games and caught six passes for 74 yards receiving and a touchdown for the Lions. 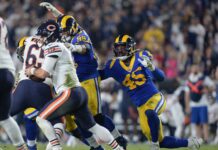 187,514FansLike
7,623FollowersFollow
275,706FollowersFollow
© NFLTradeRumors.co is an independent news source and has no affiliation with the National Football League (NFL), NFL.com, or any team(s).