According to Ian Rapoport, 49ers CB Josh Norman is dealing with two bruised lungs that caused him to exit Sunday night’s game against the Packers and be hospitalized. 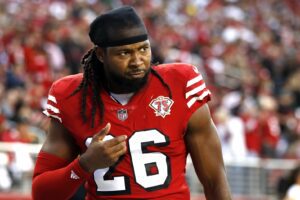 Norman was hit in the chest and was coughing up blood, which led to his exit and a precautionary stay in the hospital overnight, per Mike Garafolo.

Rapoport says he may have some internal bleeding but he’s in good spirits and hopes to be able to play in Week 4. Doctors of course will make that determination for Norman.

Norman had just signed with the 49ers as the team tried to scramble for help in the secondary after a series of injuries. He had been playing surprisingly well, so this would be another hit to San Francisco if he has to miss time.

Norman, 33, is a former fifth-round pick of the Panthers back in 2012. He spent four years in Carolina and actually received the Panthers’ franchise tag following the 2015 season

However, Carolina surprisingly pulled the tender and he eventually signed a five-year, $75 million contract that includes $36.5 million fully guaranteed with Washington.

Norman was set to make a base salary of $12 million for the 2020 season when Washington released him last year. He later signed a one-year deal with a base value of $6 million with the Bills.

In 2020, Norman appeared in nine games for the Bills and recorded 24 tackles, one interception, a defensive touchdown, a forced fumble, two recoveries, and four pass deflections.

We’ll have more on Norman as the news is available.