Field Yates reports that the 49ers have claimed RB Trenton Cannon off of waivers from the Ravens on Wednesday. 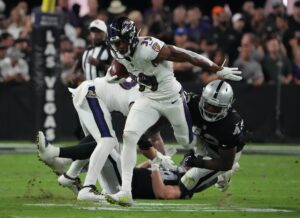 He was claimed by the Panthers and bounced back and forth between the roster and practice squad during the season. The Ravens signed him to a contract last week only to waive him yesterday.

In 2021, Cannon has appeared in one game for the Ravens and rushed for five yards on two carries.