Matt Maiocco reports that 49ers DL Maurice Hurst is expected to miss the season due to tearing his biceps during practice and is already scheduled to undergo surgery. 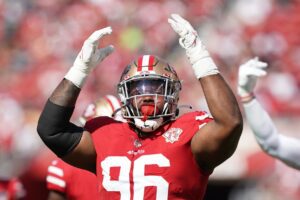 Hurst, 27, was a former fifth-round pick by the Raiders in the 2018 NFL Draft out of Michigan. He was entering the final year of a $3.983 million rookie deal and set to earn a base salary of $2,183,000 next season when the Raiders waived him.

Hurst quickly caught on with the 49ers on a one-year deal in 2021 but was injured and only appeared in two games.

In 2021, Hurst appeared in two games for the 49ers and recorded two tackles.

We will have more news on Hurst as it becomes available.