Bettcher will reportedly help to offset the loss of DC Robert Saleh to the Jets and assist new DC DeMeco Ryans in his new role as a coordinator. 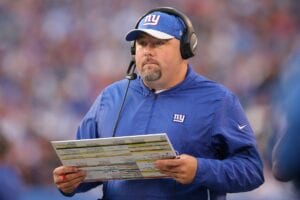 Bettcher had recently also interviewed for the Bears’ defensive coordinator position before they chose to promote Sean Desai.

Bettcher, 42, began his coaching career at Saints Francis (IN) in 2004 as their special teams coordinator/DL coach. He later worked for Bowling Green, North Carolina, Ball State and New Hampshire before the Colts hired him as their outside linebackers coach in 2012.

He followed Bruce Arians to Arizona in 2013 to become the Cardinals’ outside linebackers coach he was later promoted to defensive coordinator in 2015, replacing Todd Bowles.

The Giants hired Bettcher in 2018 before replacing him last year.