49ers HC Kyle Shanahan told reporters on Monday that K Robbie Gould has a groin injury that should cost him between three to five weeks, per Eric Branch. 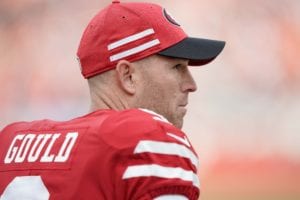 Shanahan added that they will bring in some kickers for tryouts this week and should add someone to their roster soon after.

This means that the 49ers will almost certainly place him on injured reserve in the coming days.

Gould, 38, originally signed on with the Patriots back in 2005 as an undrafted free agent, but he lasted just a few months in New England before joining the Ravens briefly and later joining the Bears.

Gould was in the fourth year of his five-year, $17.925 million contract when he was released by the Bears at the start of the 2016 season. He later signed a one-year deal with the Giants.

The 49ers brought Gould in on a two-year, $4 million contract in 2017. He was in line to be an unrestricted free agent in 2019 when the 49ers franchised him. After a lengthy negotiation, Gould signed a four-year, $19 million extension right before the deadline.

In 2021, Gould has appeared in three games for the 49ers and converted 19 of 23 field goal attempts to go along with all 11 extra-point tries.