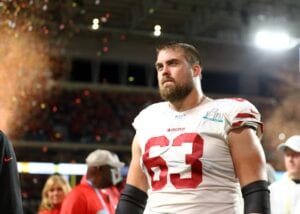 Garland, 32, originally signed on with the Broncos as an undrafted free agent out

of Air Force back in 2010. He spent over five years in Denver before he was waived at the start of the 2015 season and later signed to the Falcons’ practice squad.

The Falcons brought Garland on a one-year restricted contract worth $2,914,000 for the 2018 season and he later signed a one-year contract with the 49ers last year.

From there, Garland agreed to a one-year deal worth $2.25 million with the 49ers this past March.