Jeremy Fowler reports that 49ers QB Jimmy Garoppolo is still on schedule in his recovery from shoulder surgery and is expected to throw over the next few weeks. 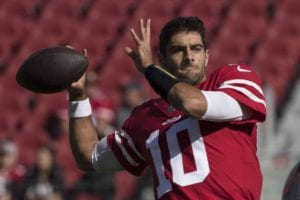 According to ESPN’s Nick Wagoner and Dan Graziano, Garoppolo could see his potential trade market expand once he is medically cleared and can pass a physical.

Garoppolo was recently excused from minicamp as the team wanted to give him time to rehab and explore potential trade options while continuing to give first-team reps to QB Trey Lance.