Bills QB Josh Allen recognizes the comparisons to Steelers QB Ben Roethlisberger but added that he has a long way to go before reaching Roethlisberger’s level.

“I think it’s more than I even realized as a kid. I watched a lot of football when I was a kid, and he was one of the biggest names out there and still is,” Allen said, via Katherine Fitzgerald of the Buffalo News. “But the way that he plays the game, I see the comparisons of where we’re at physically. But again, that’s a Hall of Fame quarterback and I got some time to go before we get to that conversation of comparing me to one of the greatest of all time.”

“In order to win the whole thing, you gotta get into the playoffs, and in order to get into the playoffs, you gotta win 10, 11 games,” Allen said. “The most important one is the next one. And again, it’s a team that’s dang good, and we know that. It’s all focused on the Pittsburgh Steelers, and to be honest, I couldn’t tell you who we play next. It’s been all them for a couple weeks now.”

Dolphins DBs coach Gerald Alexander said second-round S Jevon Holland has earned first-team reps in practice and wouldn’t play him there if he “wasn’t ready to do so.”

“We wouldn’t put him out there if he wasn’t ready to do so,” Alexander, via Barry Jackson of the Miami Herald. “That remains to be seen based on what we have going on this week in practice.”

“Jaelan is improving,” said Leonard. “He’s done well in the run game. When asked to rush the passer, he’s done some good things there. We’ll see how many [snaps], what that looks like come Sunday. He’s working on the things we’re asking him to.”

Leonard added that Phillips’ pass coverage has also “improved” and has done well in space.

“It’s tough, for sure, but I’m glad I have him,” Wilson said, via Rich Cimini. “I feel like he’s a guy I can lean on and I hope he can lean on me when those times get tough and we can go through the whole thing together. … We’re going to learn about every situation that comes up, him as the head coach, me as a player. And we’ll get better with time.”

Saleh added he was sold on Wilson after meeting him over Zoom during the draft process.

“It was a buildup,” Saleh said. “You watch tape and you’re like, ‘This guy is pretty good.’ Then you watch more tape and you’re like, ‘Man, this guy is really good.’ The arm talent is undeniable. Then you get to the Zoom meetings and then you talk to him about film and it’s, ‘Holy s—!’ for lack of a better word. It’s like, ‘Holy cow! This dude is incredible — his recall, his conversation, his knowledge.’

“It was uncanny, in our opinion, and you fell in love with that. Then you start having conversations and talking to people. His ability to get to the sideline and talk about everything he saw so he can process and fix things on the sideline, it was amazing. He didn’t have to wait to get to the phone. He’s got a unique ability in that sense.” 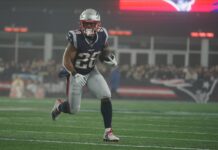